The State Court of Effingham County, formerly designated the City Court of Springfield, was created by legislative act in 1908. Although it was called the City Court of Springfield, the court had countywide jurisdiction, concurrent with the Superior Court, over all criminal cases below the grade of felony and civil cases not reserved exclusively for the Superior Court by the Georgia Constitution. In 1970, the Georgia General Assembly created the state court to replace existing city courts of countywide jurisdiction. 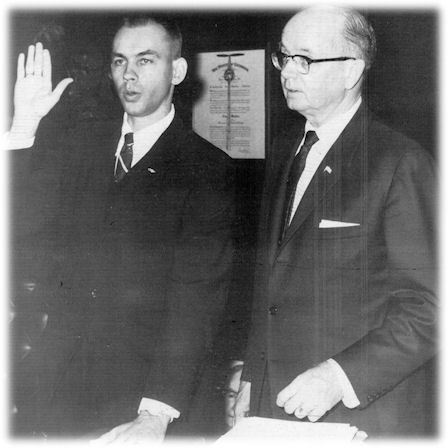 The Georgia General Assembly creates state courts by local legislation. Legislation also establishes the number of judges and whether the judges are to be full or part-time. Currently, sixty nine counties in Georgia are served by a state court.

State Court judges are elected to four-year terms in nonpartisan, countywide elections. Candidates must be at least 25 years old, have been admitted to practice law for at least seven years, and have lived in the state for at least three years.

The longest serving Judge of the State Court of Effingham County is Screven County native and Springfield attorney R. Edward Reddick, who served from 1970 until his retirement in 2003. Judge Reddick also has the distinction of playing the role of the judge in the Paramount motion picture "The Gift" (2001). He presides over the trial of actor Keanu Reeves, whose character is convicted of a murder he did not commit. The film included actors Cate Blanchett, Hilary Swank, Katie Holmes and Greg Kinnear.

Previous judges Paul Shearouse and George Fezter each served terms of 22 years prior to Judge Reddick's 33 years. The first judge of the City Court of Springfield was Eden attorney J. Hartridge Smith. The current judge, Ronnie Thompson, has served since 2003.

Importance of the State Courts

In a 1995 case, the Supreme Court of Georgia stated the importance of the State Courts to the citizens of Georgia in the following words:

"Georgia's state courts… exercise comprehensive jurisdiction over a wide range of claims, including landlord/tenant disputes, misdemeanor offenses (including driving under the influence), contract and tort cases, and cases involving real property and small claims, but excluding only felony criminal cases, certain domestic cases, equity matters, and land title cases… The expansive jurisdiction of our state courts is reflected in the number of cases that are filed there each year by the citizens of this State..."

"Handling these cases in the state courts is an important, often monumental, task. The impact of the state courts on the daily lives of Georgia citizens is as great, if not greater, than our appellate courts. State courts, are, more than most other courts, truly the "people's courts," and a prime example of the inaccuracy of the misnomer "lower court." It is true that many of the matters adjudicated in our state courts do not concern the complex issues that today tend to dominate media headlines. However, the matters dealt with in all of our state courts on a daily basis carry great significance for the litigants involved, and result in consequences that are serious, often dire, to those litigants."

"[M]any Georgia citizens have occasion to be in the State Court… either as litigants, witnesses, jurors, spectators or counsel. For many of these individuals, their initial, possibly only, contact of any serious nature with our judicial system occurs in the State Court… These individuals' experiences may constitute the sole basis for their personal impression of our judicial system, and for their respect, or lack thereof, for the judiciary of this State."

"It is, therefore, obvious that our courts require honest, talented, and competent judges. Nowhere is the community more sensitive to the regularities, or irregularities, of judicial conduct than at the local level. In state courts, the entire fabric of trial procedure, including dealing with unprepared, unrepresented, and inexperienced litigants, is in the hands of the state court judge. The state court judge plays a crucial role in achieving even-handed and just results, particularly because litigants of widely disparate backgrounds, resources and abilities are involved. State court judges represent one of the first bastions of our judicial system, and, to thousands of the State's litigants, are the judicial system."

Today and everyday, the State Court of Effingham County is dedicated to faithfully discharging its duties under the Georgia Constitution, and providing litigants a forum where "even-handed and just results" may be wrought in the most economic and efficient manner possible, in compliance with state and federal law.
[]